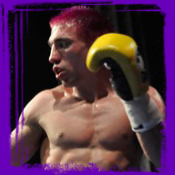 Two eyes are better than one

It's been far too long since I've updated the Muay Thai Stay Fly site and i am committed to doing it, now that it's apparent that the world isn't ending today.

First, let me update the party people out there that haven't heard yet. Tragically, i lost my last fight on 12/1/2012 against Salah "the Beast" Abdelsalem on the Muay Thai in America show -In Honor of the King.

Fate would have my eyeball almost cut from my skull in a freak turn of events. But, the good news is that i can see the screen to type this update fine.

The fight was a good one, back and forth for the first 3 rounds. I was starting to feel comfortable, getting used to Salah's unorthodox style finally and settle in to mixing it up some more in the fight. Late in the 3rd round, Salah landed a solid elbow to my right eye, cutting my lower eyelid 3/4 of the way off, closing my eye, and making a few thousand people almost lose their lunch.  Immediately after the elbow, i knew i was cut. About a half a second after the elbow, i realized that i couldn't open my eye and that i couldn't continue to fight. I took a knee, kinda crapped my pants a bit cuz i knew it was bad, but not how bad.

Immediately after leaving the ring, i took a ride in one of those nifty Bam-bulances to the hospital at Marina del Rey, which in retrospect seems to be a complete waste of time.

Without an ophthalmologist on staff, I waited a few hours to see what was going to happen next.  They called this nice plastic surgeon to come stitch my eye up.  After waiting a few hours for him to show up and get me fixed, he injected me with some numbing medicine a bunch of times, which was brutal. Then when he started, apparently he hadn't numbed where the first two stitches were going, because i felt every silver stinging millimeter of that sharp needle sliding through my skin. He obliged me with some more numbing goodness and continued on his way. After a total of about 30 no-fun stitches, he sent me on my way, telling me that i may or may not need a stent put in my lacrimal duct (the tube that your tears drain out of), as mine was severed. He suggested i see an ophthalmologist or a ocualar-plastic surgeon to see if i'll need the stent.

In retrospect, of course i would need the stent. The odds of my lacrimal duct just fixing itself once i was stitched up were less than the odds of successfully navigating an asteroid field and less than half the chances of surviving the night with no shelter on Hoth.

So, my buddy Dr. Lam in Plymouth Meeting hooked me up. He cut my eye along the same line as it was cut before and fed this small silicone tube through it to help my tears drain. It was the first time i'd ever been unconscious for surgery and it was weird. I was wasted all day long. It kinda sucked.

I saw the doc since then, and he took the stitches out, says i'm healing like Wolverine.

The game plan now is that the stent will be in for a couple months, during which time i can train and even fight. I'll give it a few more days before i get back to sparring, but can train otherwise without problem.

looks like i'm back to being bent on global domination sooner than later, and i'm pumped about it.

Anyway, thanks to everyone for the good thoughts, kind words, and the fattening treats to keep my mind off the pain of disfigurement.